Rare coins have a huge history of desirability. As from the beginning of time people have enjoyed coin collecting. Collectors of all sorts have shown an interest in wanting to own coins for their beauty, art, investment or just to build collections for fun. In the past, all rulers be they Kings, Emperors, in fact any nation leader stamped his absolute rule by featuring his portrait on the nations currency. Also coins bore a message.

This 1643 Triple Unite British Coin was minted to show the uniting of England and Scotland in the reign of Charles I.

Rare coin collecting is not a fad, because it began in the middle ages. Kings and Nobility were actually the first collectors. People often ask how does one find coins in such incredible condition from the 1600s or 1500s, well, the answer is because a King or an Noble man had chosen to collect that coin, that was the only possible way that it could have stayed in such an incredible condition for so long, half a millennia because some important person took the time to put it into their collection. Now even the collectors’ cases, the collector’s cabinets that these Kings and noble men put their coins in are collectors’ items in themselves. You can find some collectors’ cases that look like fine pieces of furniture that hale from hundreds of years ago and even those are quite desirable today.

Now, it should be clear that the rich have the ability, opportunity and funding to choose whatever they want. Most rich people own a collection of something, maybe its art, Persian rugs, antique jewelry, cars, wine, artworks, coins….whatever. People of wealth collect something, they usually don’t want junk either…they want the best.

What drives that passion for the best? Well just like the person who climbs Mount Everest, the answer is, because it’s there and if there is something better out there what the collector presently has, he is not going to stop until and gets that better piece. Now, that is just the nature of the world of people who want great coins and this is true of all fields of collectables.

Competition drives collectors; The Registry Set is not that dissimilar from cars for collectors to analyze. Judges come around and judge each show car on a points scale to determine the best one and the give a ribbon to The Best in Show. Well PCGS and NGC are two certification services that came up with a unique concept with how to quantify what the best is and then put together a set. You can actually log into their website and write down all the different coins in your collection and the computer will determine where you stand in terms of the position of your coin collection. Do you have the best set? Second best set? Third best set and so on, based on you inputting all the different, specific coins in your collection. So it is a very great concept and has worked well with building competition. 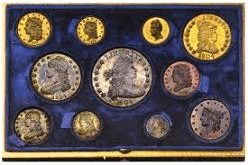 This set includes the original, custom-made yellow leather and blue velvet case that housed the coins when U.S. State Department envoy, Edmund Roberts, presented it during an overseas trade mission on behalf of President Jackson to King Ph’ra Nang Klao (Rama III) of Siam in April 1836. The King’s son, Rama IV, was the subject of the book, “Anna and the King of Siam,” and the famous Broadway musical, “The King and I.” Sold 2005 $8,500,000

There is also the reward of ownership; there is a great deal of pride in having handled the best. 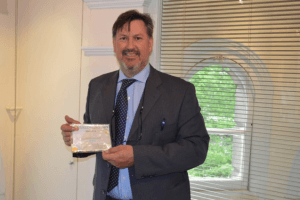 I won, at auction in 2014, the greatest Key Date of the sovereign series, The 1937 Edward VIII Sovereign, for a world record of £ 516,000 and the sheer excitement and joy of holding that coin in my hand is something I’ll never forget. The wait for the final hammer was excruciating.

Last sold in 1984 for £ 40,000 and the then purchaser had to race to Japan by private jet in time to attend the auction.

The only single 1937 Sovereign available in the world. 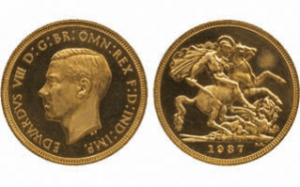 There is also the goal of completing a set, as well as the satisfaction of doing so. Once the decision has been made to collect a specific set of coins there is a great deal of satisfaction in getting that last difficult piece that you are looking for to complete your coin collection. So collectors search, sometimes a lifetime hunting for that one special piece to finish their collection.

It’s addictive too, many people start of as investors and becoming so hooked as collectors that they can’t give it up and no amount of money can prize their great treasures away from them and that’s quite common and its very much part of rare coin collecting as it is addictive. Once you get started be forewarned that you might find it all consuming in terms of reading about it, researching it, wanting to understand them better…it is very fascinating.

Coin Collecting is a life style too. People who are serious about their collections make it an important part of their life. It’s not just the same as an investment; it is a life style choice.

Many collectors travel the world, mixing their hobby with adventure, it’s quite common for collectors to go on multi country trips around the world and search for treasures for their collection and mix it with their adventurous holidays in glamorous places. Frequently the major Coin Conventions that are held around the world are held in very posh resorts in very spectacular places..

Rare coins are investment, they’re art, they’re tangible wealth and these are all unique elements of rare coins.

This is a great treasure of a near perfect, a beautiful British Five Guineas from 1688.

We love to talk about Rare Coins!